Whilst I was pregnant I always imagined writing this birth blog. I imagined writing about the nitty gritty details of me screaming at my husband during labour and describing the methods I used to cope with the pain. I imagined I would write the word “vagina” a lot and talk about the sensation of thinking I was going to poo on the bed amongst a host of other over-sharing details of my birth.

Unfortunately (for you) you won’t get to hear me speak about any of these hilarious-too-much-detail experiences because they didn’t happen.

I had a wonderful, amazing and very calm birth to deliver my big and healthy baby. But it’s not at all what I had imagined.

Let’s start from the start…

For the later part of my pregnancy I had been consistently measuring about 3 weeks ahead.

I was constantly bombarded with the typical “Are you sure you’re not having twins?” and “Wow you’re huge” comments.

Surprisingly, being told I was massive didn’t bother me… but if one more person asked me about twins I would have slapped them!

Hot tip: Don’t ask a woman who is not having twins, if they are sure they aren’t. It is likely she has had multiple appointments, tests and scans. If they haven’t yet found the second child, then she really should see another doctor!

A third trimester scan confirmed that my baby was extremely well-fed on the inside, measuring in the 90th percentile.

My obstetrician and I had started floating the idea of an induction at 38-39 weeks so that my baby didn’t grow to be an extra-large sized watermelon trying to wiggle out of a normal-sized watermelon hole.

With the pelvic floor physio work that I do, I know that there are certain risks associated with babies over the size of 4kgs.

Now this is not to say that you cannot birth a 4kg baby without perineal trauma.

I have had plenty of patients who have had 4+kg babies and their pelvic floor condition is fantastic!

However it was a risk that I was not keen to take.

The idea of an induction initially did scare me a little bit.

I had always imagined my waters breaking in the middle of the night. Then I would labour at home on a fitball for hours and rush to the hospital at the last minute and push my baby out within 10 minutes of getting there (Ha! Doesn’t that sound like a treat!)

Induction obviously didn’t look like this, but I was OK with that. I knew of many women around me who had had positive induction stories and I chose to surround myself with those vibes.

The other option would have been to wait to see if I go into spontaneous labour. Given that my baby was growing at a rate of knots… I didn’t want to chance being pregnant until 42 weeks and then trying to birth a 4.5kg whopper!

I started speaking to my belly and gently reminding my unborn child that if they wanted to come out naturally the day before my induction that would suit me perfectly. If they also wanted to stay around the 4kg mark and no bigger that would also suit me very well. I figured that if they listened to their mother in the womb, then our relationship would be off to a good start!

Haha… they didn’t listen at all.

So we made it to the induction date. I was 38 + 3 weeks pregnant with no signs of waters breaking, baby engaging or labour contractions starting.

To be honest, I had barely felt any Braxton Hicks or signs of pre-labour leading up to this day.

I felt great! I was body surfing at 38 weeks pregnant!

I went in on the Monday night to be induced with the gel. The gel is a prostaglandin gel which is meant to help ripen your cervix.

For some women, this may be enough to kick start natural labour.

For other women, it may be enough to soften the cervix enough that your waters can be broken.

For me, this gel might be enough to do…. nothing!

After the gel was inserted we went out to dinner with my parents as a last hurrah knowing that sometime tomorrow we would meet our baby. We came back to the hospital to be monitored and then were sent home to get a good nights sleep. 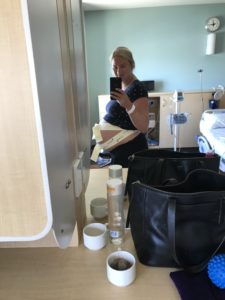 This gel gave me “tightenings” which felt like period cramps but they were mild enough to still be able to walk and talk through.

By the next morning, all of these “tightenings” had disappeared.

It’s so strange when you are willing your body to be in pain. When you are so badly hoping you won’t get any sleep at night because your body starts labouring. When you are asking the universe to give you this challenge!

My obstetrician checked me the next morning… and nothing had changed.

My cervix was tightly closed with no signs of wanting to let my baby out that door.

So we did another round of gel and then proceeded to walk for 3 hours around the neighbouring suburbs.

The “tightenings” were getting more intense but I could still walk and talk through them, I was just really uncomfortable. At one stage I was kidding myself that maybe I actually was in labour but I just had an incredible pain tolerance!

We stopped in the park to lie down so that hubby could massage my back and all my tightenings stopped. I did not take this as a good sign. 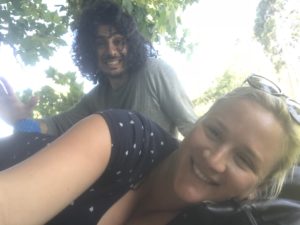 Hot tip: We lay in the park for a massage not because of labour but because I had conveniently injured my back the day before induction. Be wary when trying to practice lifting the baby capsule in and out of the car.. it may cause injuries!

Three hours later we walked/waddled back to the hospital and my obstetrician checked me again.

Surprise, surprise… no change at all. Nothing. Nada. My cervix was being stubborn.

This presented us with 2 options.

We go home and wait until my body decides to go into natural labour… again factoring in the risks I spoke about earlier.

Or we proceed with a C-section.

This was the strangest part.

I had always factored in that a C-section was an option. But I had always imagined that if I’d needed one it would have been after labouring for a while and then needing to be rushed to theatre.

I was calm and comfortable. My baby was healthy and happy. I had just eaten my lunch and had a coffee and now I had to decide on whether I was going to have a major abdominal operation.

Between my husband, my obstetrician and I we made a decision to go for it. After many emotional and hormonal tears we all agreed that we were happiest with this option.

Surprisingly the hardest part was making the decision. Once the decision was made, I was fine.

Part of me had wished that the decision was outside of my control ie. baby was breech and that I had no other choice but to have a C-section.

However looking back, it was so empowering to be able to be the person to make that call.

To actively participate in the decision making of how I would birth my child.

I hear of so many women feeling awful after a C-section because they felt that the decisions were made without their input. Fortunately for me it was quite the opposite. 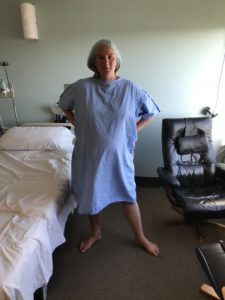 So this all happened around 2pm and the C-section would go ahead at 5:30ish. That 3 hours of in between was so strange but so magical.

It was strange because we knew that by dinner time that day we would have a baby. An actual baby. Here. In my arms. I thought I had wrapped my head around that over the past 9 months but clearly not.

It was so magical because it was this beautiful quiet space for me and my husband to spend our last 3 hours together before 2 became 3. We chatted, we watched the cars out the window, we cried, we reminisced, we future-tripped, we took photos and it was so so special.

I thought I was all-cried-out for the day but then they came to get me for theatre and the water works started again.

I was trying to explain to my obstetrician that I wasn’t upset I was having a C-section but I was just generally feeling emotional about having a baby. I think he felt awful that I had cried so much but it was nothing to do with him or my delivery and everything to do with becoming parents in the next 10 minutes.

Hot tip: You cannot “un-do” a whole days worth of crying from your face for your birth photos to look pretty. I held a cold facewasher to my eyes for quite a while to undo the puffiness, just to start bawling again when he arrived. Don’t bother!

The long and short of having a C-section is that you have a spinal anaesthetic which doesn’t hurt. It makes your legs feel warm and very heavy and you can’t feel much from the chest downwards. You can however feel pressure. This was strange. You don’t have any sensation of pain at all but you can feel them tugging and pulling at your tummy.

5-10 minutes after lying on the table they pulled my baby out!

I couldn’t see his/her genitals over the drape so I was asking my husband through all the tears and sobbing “what is it?!”.

I had told him during the pregnancy about how some girls are mistaken for boys at birth because their genitals can be quite swollen. He was hesitant to tell me in case he got it wrong… but there was no denying, it was a boy!

Our beautiful baby Massi. A healthy 4.1kgs with fantastic lungs, filling the room with his screeching immediately! 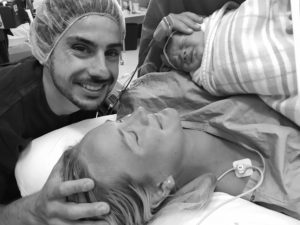 I could barely see him I was crying that much but all I remember is thinking he was nothing like how I imagined. I thought I would birth a dark haired Italian looking baby. However this little guy was fair…and blonde!

Fast forward 4 weeks and he is an absolute little legend. He is breastfeeding like a champ and putting on tonnes of weight. He is a wee-ing and poo-ing machine and gives the best cuddles.

I am pleasantly surprised with my recovery too. I only required pain medication for one week and have been able to walk most days of the week. I am shocked with how physically able I am, and whilst I don’t know how it feels yet to recover from a vaginal delivery… I have no problem with needing a C-section again in the future.

Being Massi’s Mum has been the most amazing journey. It has brought me hard and fast into the present moment. We have spent 4 weeks learning from each other and loving each other. We have spent hours upon hours cuddling and staring and getting to know each other.

I have had more of his bodily fluids on me than I care to admit to and I have never used the washing machine as much as I have recently. I have mastered the art of doing everything with one hand and I have learnt to survive on 2-3 hour blocks of sleep.

So there you have it… the final chapter in my first pregnancy journey.

… and whilst my birth story is not the one I thought I would be telling, it was perfectly right for us.

Pregnancy round 2: The final countdown

The pregnancy diaries: The final countdown

The pregnancy diaries: The first 6 months

Would you like to stay up to date with my weekly pregnancy email? Click here to join the fun!